G’day, Forts fans! It’s been a couple of weeks since the launch of the new Moonshot DLC, and we couldn’t be happier with the response it has received. So great to see so many servers with the blue Moonshot icon. Since launch, we’ve been busy listening to and responding to your feedback, the results of which are contained in this update.

Recently, we saw Moonshot get a thorough play through by some of Forts’ experienced players in the Moonshot Invitational Tournament. The new features and weapons were deployed over the course of some 1v1 regular battles, 1v1 & 2v2 Capture Point matches, and rounded off with a 4v4 maelstrom including the hosts Frazz and Incursus. Check it out on one of these links! 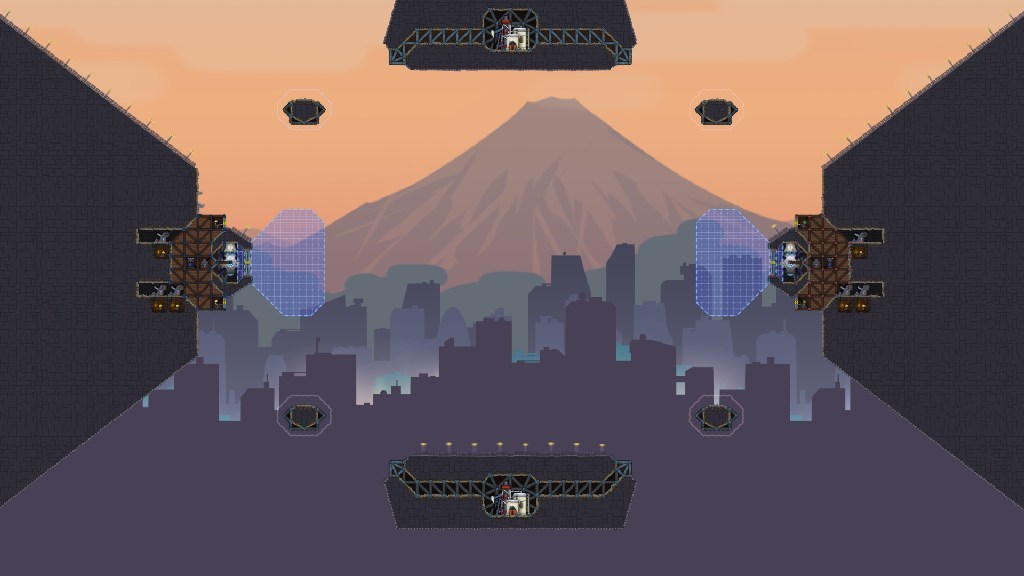 We’ve added a capture point template map for those wanting to create maps for the new game mode. The map can be found under the name ‘dlc1_MP0(Template – CP mode)’ in the editor. We have also put together a guide to help you get started.

Optimise: convert meffect_list from a list to a vector to save making many small memory allocations
Optimise: reserve space for 1000 sorted effects

Fix: some systems can run out of memory due to integrated display drivers using application memory (double virtual memory available to 4GB)
Fix: crash when a projectile action spawns a new mesh projectile with none available
Fix: mesh projectiles can run out, temporarily preventing the spawning of new ones
Fix: crash when Armourdillo commander is used with Extra Stuff++ mod
Fix: crash in ClientManager::Update during replay when a mod change causes ClientData::mSelectedDeviceIndex to go out of range
Fix: another instance where out of range ClientData::mSelectedDeviceIndex can cause a crash
Fix: crash with invalid edge indices
Fix: copying ground blocks with custom envs textures & surfaces are lost and auto environmental effects are added incorrectly
Fix: field auto env effects in custom env are not created
Fix: when converting to another environment surface indices can become invalid or change into common surfaces
Fix: Ctrl + Delete crashes editor if environmental effect props are associated with any of them
Fix: after creating a new block with blank edges, it’s hard to change the edges of the whole block
Fix: EMP and swarm missile projectiles collide with background portals
Fix: EffectsManager gets a large delta at the end of loading while World zeros it, causing many effects to expire
Fix: environmental effects don’t have their lifespans extended, causing them to periodically expire
Fix: environmental effects expire if time is sped up
Fix: effect script and missile trail filename exceeding buffer limits can be used without warning
Fix: crash drawing rare invalid effects
Fix: debugging sprite on smoke projectile remains
Fix: smokebomb projectile sprite is missing
Fix: portals can be linked while/after changing materials
Fix: replacing materials doesn’t instantly unlink portals or cancel warmup
Fix: Store::Load accessing NULL file that should exist (blocked by antivirus?)
Fix: portals can only be used once per frame per projectile/beam
Fix: new tech building descriptions not showing – device strings.lua files not commited to repository
Fix: It’s possible to extrude rope from disabled materials (e.g. backbarrier)
Fix: mExtrudeMaterialIndex is invalid if Extrusion.DefaultMaterial is not found
Fix: You can build devices over new bracing that’s been replaced with armour
Fix: Spy enemy resource panel is out of sync with the rest of the HUD
Fix: In ‘Head in the Sand’ and ‘Fire in the Hole’ if you upgrade mines they won’t count towards the objective
Fix: missiles can be previewed upside down on ‘Sever & Seize’
Fix: derricks in capture maps can be destroyed using portals
Fix: neutral portals are vulnerable to splash and emp, and behaviour is buggy when disabled by emp
Fix: weapon refire can be stuck repeatedly trying to fire against the edge of a door
Fix: in Mission 114 AI can’t build foundations on the fissure between the ground and safe zone
Fix: can’t build to a backbarrier foundation on Close Quarters
Fix: free particles are not cleaned up in CampaignScreen::ExitCampaign
Fix: Barrier material not invulnerable
Fix: incendiary projectiles fail to collide with ground when passing a non-flammable strut in the same frame
Fix: ‘A Bridge Too Far’ objective Don’t attach to floating islands granted incorrectly
Fix: portals are enabled in height challenge
Fix: brake context button has a placeholder texture
Fix: negative and zero brake levels broken
Fix: sparks keyframes can be empty, and no warning is shown
Fix: Russian ‘Unranked’ translation overlaps rank category buttons
Fix: incorrect initial hitpoints at times, causing desync when repairs are attempted
Fix: extruding a shield over a ground device fails and leaves behind a standin-foundation, preventing further construction
Fix: ground devices can be placed below ground at the back in ‘Lock Pick’
Fix: brake context menu doesn’t show current state for 10%
Fix: Fmod falls back on nosound to allow players to play multiplayer when init fails
Fix: Desync when restoring some portals from keyframes
Fix: can’t hit background devices in some situations
Fix: “Log into Steam and go online to use this feature” is overlapped with player and map columns
Fix: Background team blocks auto-orientation
Fix: crash when Moonshine extrudes portal over weapon
Fix: extrusion looks up active materials
Fix: when extruding a short portal preview works but construction fails (now substitutes bracing)
Fix: when extruding a long portal it fails without preview (now substitutes bracing)
Fix: extrusion fails if current selected material is too long (use support material instead)
Fix: attempt to link nodes to self when extruding large portal box
Fix: very short portal extrusions are possible and don’t have previews
Fix: extrusions so short that the cross brace fail are common (increased minimum offset from 30 to 40)
Fix: weapon bounding box is not lifted at the base to allow placement near armour below, or retrofitting
Fix: big explosion missing when howitzer collides with a shield
Fix: flamingbuzzsaw is missing RayDamage
Fix: standard forts are out of date
Fix: crash when old chat lines with workshop icons are culled (unlimited history again)
Fix: crash when updating refire on weapon with no resource account
Fix: crash when showing very large production and capacity values for device tags