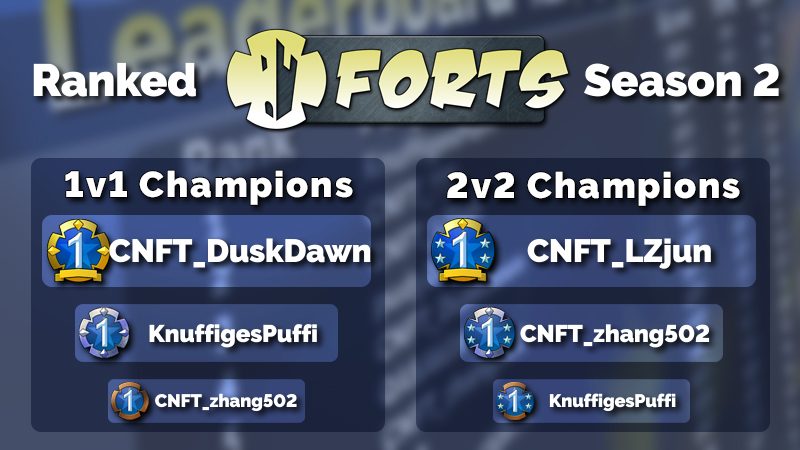 Today we’re bringing you news of the result of the second season of Forts Multiplayer and a new update with a bunch of fixes, features and balance changes.

Season 2 of Forts Ranked Multiplayer has just finished and it’s been another hard fought fight to the top, with millions of bullets fired, thousands of players experiencing the power of gravity, and, when it comes to nukes, more drunks than a bachelor party brewery tour!

And so to the winners. In the 1v1 arena we’re happy to announce that CNFT_DuskDawn has improved on his eighth place finish in season 1 to claim the top spot. Congratulations! In the 2v2 world, CNFT_LZjun has finished at the summit, adding the 2v2 gold medal to the 1v1 version he claimed in season 1. Well done!

As before, these players will receive an in-game gold medal for their heroics, with the second and third placed players receiving silver and bronze medals respectively. On top of this, all players who finished in the top 20 will receive a medal to reflect that. The top 20 of each leaderboards are as follows:

Along with the balance changes listed below, Season 3, which starts now and ends on January 31st, will feature random map selection. This is to ensure players don’t just sit on a favoured map with a favoured build order, but have to adapt to the battlefield they are given. Hosts can still chose between regular encounters and capture mode via a checkbox. In addition to this, we have made a few other changes to further streamline the ranked experience. Check out the changelist below to find out more.

For modders a universe of possibility has been opened up with fully featured scripting support. Just add script.lua to the root of your mod, add dofile(“scripts/forts.lua”) to the top and then treat it much like a mission script. Tutorials will be coming, but for now we have removed compilation on maps/03-weapons/03-weapons.lua, maps/02-resources/02-resources.lua and ai/ai.lua to provide some samples. We’re also working on documentation of the scripting API. Alexc96161 has generously written a starter guide. Just remember to keep all of your state in the ‘data’ table, or you will cause errors and desyncs.

On top of this, weapons can now have multiple prerequisite combinations, multiple upgrades with customised context buttons, and material conversion buttons can be added to the context menu. ReloadTime has been simplified, just set ReloadTimeIncludesBurst = false and you’ll find weapons easier to balance.

To help manage the increasing complexity of mods, we’ve added support for source control within mod folders. Basically, the game will filter out anything it doesn’t recognise when updating, including any .svn or .git folders. These will not make it into the Workshop item, keeping size down for players.

Join us on The Forts Official Discord to get direct help from us and other modders.

There’s much more in this update that can’t easily be summarised, so please trawl through the changelist and see how much love we put into this update. 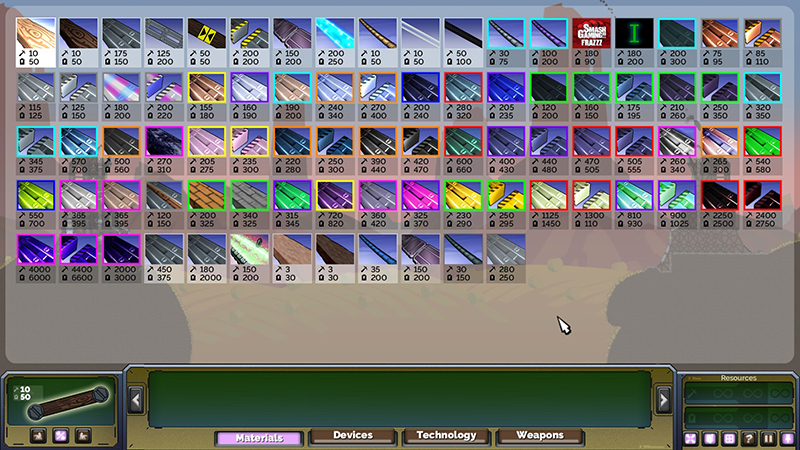 Improve: move field identifiers to projectile_list.lua
Improve: change FIELD_BLOCK_ANTIAIR to FIELD_BLOCK_FIRING (doesn’t apply just to anti-air)
Improve: replace use of cos/sin/FastCos/FastSin with cosf/sinf for performance/accuracy
Improve: moved AddPrerequisite from DeviceManager to World for use by materials
Improve: move portal controls into the first row of the context menu for consistency with doors
Improve: HUD-Buttons-Blank*.tga context buttons for use as mod upgrade & conversion button template
Improve: make link and node debug text more readable but translucent to see what’s under
Improve: split settings.lua into settings.lua (cloud compatible) and settings_hardware.lua (local hardware config)
Improve: replace upgrade display name search with SaveName search in EnableDeviceUpgradeOfType script function
Improve: reorder Add*Control functions to appear next to each other in documentation

Thanks for playing Forts.