G’day Forts Fans! This week’s update brings you a new map, plus a few fixes that should smooth out a few issues.

Left handers out there will appreciate the mouse button swapping option in the Options -> Input tab. If you would like to contribute a good left handed keyboard configuration please contact us. 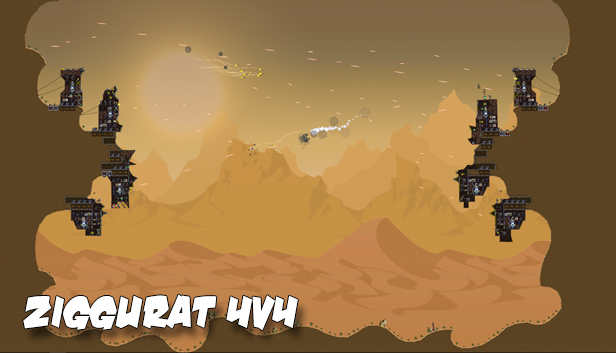 Staggered on the side of the desert cliffs are eight forts, hell bent on each other’s destruction. Gung-ho commanders will have their lust for battle quenched by manning the central forts, which will receive the most punishment, but with extra mine positions, will also have the capacity to build truly awesome structures of destruction.

Add: New map Ziggurat 4v4
Add: Indicator of which fort is yours in Team Death Match
Add: Input option to swap left and right mouse buttons for left handed players
Add: Key for cycling group fire (Y)
Add: Option for hover refire when device selected
Balance: Prevent barrels from being reclaimed
Fix: Language detection is based on system default, not user default
Fix: Clients who time out sometimes think they are still in the lobby
Fix: Slow to load clients stuck in loading screen
Fix: Unable to build out from corners in the terrain at some angles
Fix: Special Characters can be entered into edit fields creating problems
Fix: Grouped weapons only display cost of master weapon when firing
Fix: Can sometimes build mines in invalid locations
Fix: New ropes can be attached to hanging ropes

Foundations are the most important joints in a fort, and must be carefully considered. Aside from being key to your forts stability, they also cost resources (50M/400E) unlike regular pivots, so should be used sparingly in the early stages of your build order. Pegs, used to anchor ropes to surfaces and structures for greater stability, also have a cost (60M/600E), but can have several ropes attached to them at no extra cost.

Thanks for playing Forts, and don’t forget to sign up to the next tournament, if you want to test your mettle against the best in the world, and become the fourth Supreme Champion!