Of course it wouldn’t be a Forts update without a few crucial fixes. Check out the changes below. Thanks again to all of those players who submit crash and desync reports to make these fixes possible. 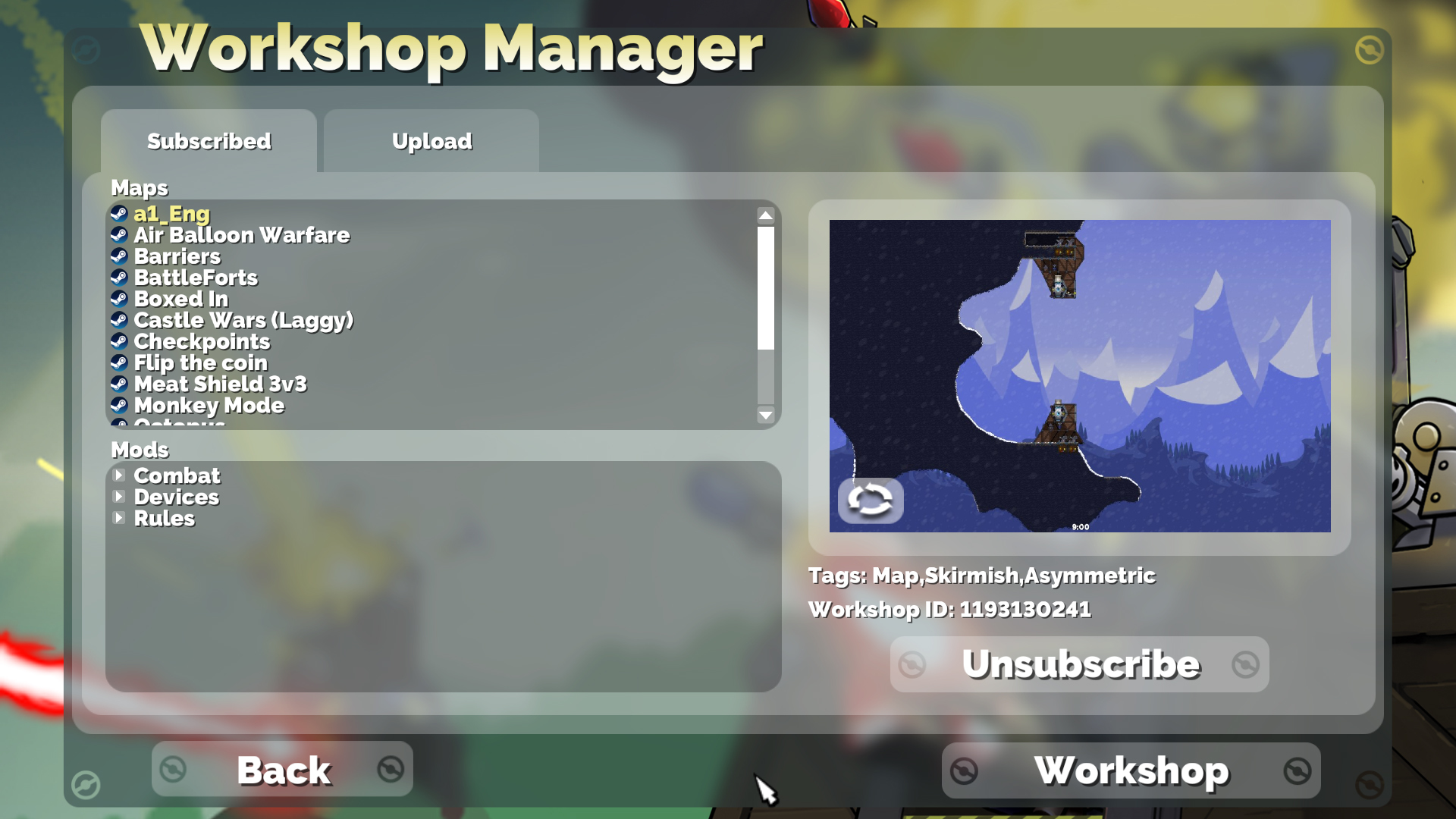 Players can now create and easily share their own mods to add new devices, weapons and materials, and alter the game balance, physics properties, or visuals of the game. Mods are uploaded and updated in the new Workshop menu. Players who do not have a mod are invited to subscribe in the lobby if necessary.

As an example we have created a new device, the Large Sandbags, and made it available for subscription. Mod makers are encouraged to inspect the mod files to see how to add a new device, complete with HUD item textures and localised names and descriptions. Weapons are similar; you can use the weapon_pack (Tons of Guns) mod as a guide for these. We’ve started an official modding guide, and you can get support on the modding channel on the Forts Discord.

Mods can be given a category like the built-in mods, such as Devices or Rules. If one is not set in the mod.lua file, or it’s not valid, it is put in the default ‘Miscellaneous’ category.

When publishing a mod for the first time, we recommend making it visible to friends only, and testing it with them. Issues not apparent when testing mods locally may appear, with regard to finding new texture assets. Prefix filenames with the ‘path’ variable to reference these. When it works as expected you can make it public.

The Workshop mod support does not extend to special mods such as commanders, factions, keyboards or languages at the moment, and does not allow custom campaigns or environments yet. We’ll be looking at these in time.

Add: custom mods can be uploaded via the Workshop menu and subscribed to in the Lobby
Add: sample Workshop mod ‘Large Sandbags’
Fix: crash caused by lights.lua when player is an observer
Fix: lights.lua still loaded when lights disabled
Fix: crash when selecting a replay when none exist
Fix: test for ground nodes is too loose to pick up many symmetry errors
Fix: symmetry errors in All or Nothing, Balls 2v2, Caverns, Drop the Bomb, Hellmouth, Moorings, Needles, Pillars, Snow Leopards, and Wingman
Fix: desync/memory corruption when a player selects a device as it goes neutral
Fix: desync/memory corruption when splash damage destroys a strut
Fix: access of deallocated memory when penetrating projectile destroys a strut, causing potential desync
Fix: prevent Start Loaded mod from being selectable (activation makes no difference)
Fix: updated translation of some Chinese strings
Fix: “-template-” and “All Or Nothing” maps not excluded from map editor
Fix: auto subscribing to maps and mods in replays
Fix: Workshop maps which have AI fail to be listed in Skirmish
Fix: map symmetry validation on saving maps
– only report errors if script is flagged as symmetric
– prevent invalid symmetry maps being uploaded where possible
– old symmetric maps need to be re-saved in the map editor before they can be uploaded through the workshop manager
Fix: grouping sounds are not audible
Fix: preview displays are compressed horizontally for expected 16:9 images