We’re also excited to be welcoming Chinese players to the ranks, as Forts has undergone deep localisation. We are looking forward to receiving some dents from this giant pool of potential commanders. 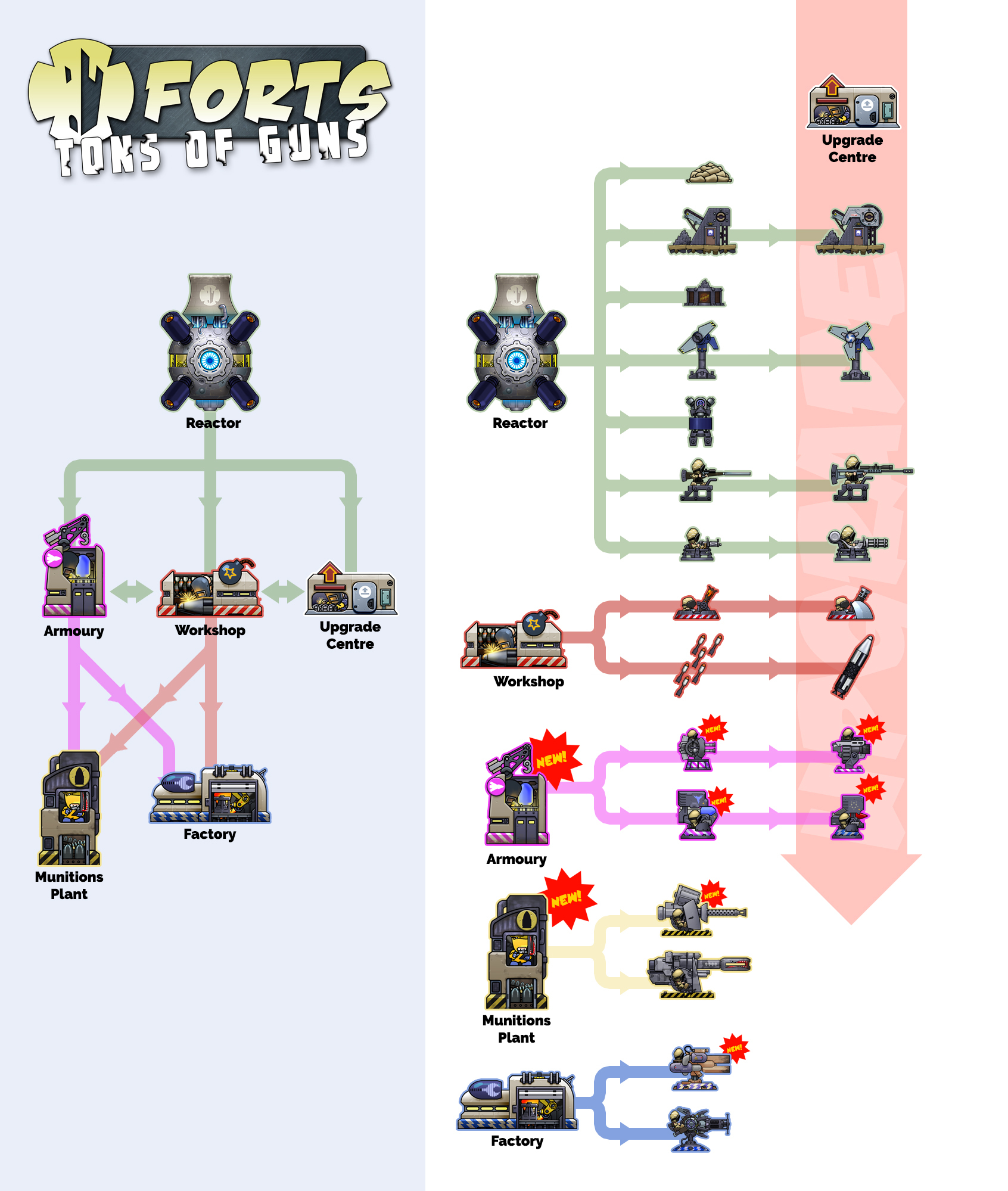 Armoury – This vertical tier 2 tech building is buildable straight from the reactor, and allows the construction of the Flak and EMP launcher, which can both be upgraded to Shotgun and Rocket launcher, respectively. It also unlocks the Factory and Munitions Plant.
Munitions Plant – A vertical structure, this tier 3 building runs parallel in the tech tree to the Factory, and unlocks the ability to build the new 20mm Cannon and the classic Cannon.

Flak – This Anti-air weapon is great for clearing the skies of enemy projectiles. As well as the ability to auto-fire, the range can also be set manually to take out hidden weapons, such as clearing mortar pits.
Shotgun – Upgraded from the Flak, the Shotgun is great for punishing the enemy for building weapons in the open. Primarily an offensive weapon, it lacks the auto-fire feature of the Flak, but the spread of projectiles can be dictated by the distance the cursor is from the weapon in the fire arc, meaning it is great for defending attacks from above, in a pinch.
EMP – Releasing an electromagnetic pulse on impact, this weapon can disable enemy tech, halting resource production, paralysing weapons and stalling construction. Great for powering down troublesome weapons or interrupting building of the enemy base.
Rocket – Exchanging the subtleties of the EMP for pure destructive power, the Rocket launcher releases two explosive projectiles, doubling the chance of impact. Grouped up, a salvo of rockets can turn the tide of a battle.
20mm – Coming in at around half the price of the classic cannon, the 20mm fires a burst of destructive shells, great for taking out multiple enemy targets and softening up the oppositions fort. Use in a battery, it’s effects can be devastating, while staggering fire from multiple 20mm means the enemy receives a seemingly unending stream of projectiles.
Firebeam – The Factory has been repurposed in Tons of Guns. With the classic Cannon now being built in the Munitions Plant, the Factory now produces not only the classic Plasma Laser, but also the new Firebeam. This incendiary weapon can be used to bypass enemy armour and ignite anything that lies behind it. It can also be used to set fire to projectiles, increasing their potency and granting them incendiary qualities while shortening their lifespan. Skillful use means that it can be used to defend from enemy weapons, including cannons, or igniting friendly projectiles shortly before impact for increased firey carnage!

To see these weapons in action, check out the trailer below:

Players can now select from a host of new mods, either in isolation or in combination, allowing for a diversity of game modes, a selection of which can be seen below. We’ll be adding mod support for the Steam Workshop in the near future.
Truce – Many players have expressed a wish to be able to build up their fort in peace before hostilities start. Game hosts can now set the truce mode to 3, 6 or 9 minutes, before the first shots are fired.
Zero Gravity – Tired of pesky gravity holding you down? Now you can battle without it with the Zero Gravity mod, and watch as projectiles fly into the enemy fort exactly where you aim them, with no dip, and see parts of their fort float away.
Rapid Fire – Speed up the ferocity of destruction by reducing reload times to a minimum. All that’s holding you back is your resources (unless you use the Unlimited Resources mod at the same time 🙂

We have updated our existing roster of From Scratch maps with Tons of Guns enabled Forts, for you to try all the new weapons out on, as well as some Pre-built maps. Just look for the gold Tons of Guns icon for maps with the new weapons. For those who yearn for the purity of the original tech tree, simply deselect the Tons of Guns mod in the mod selections screen.

We’ve added a new alarm sound that triggers when your base is on fire, to make it easier to hear in the thick of battle.

We hope you enjoy the new content, and thanks for playing Forts!

Fix: desync when refiring a damaged weapon then repair area
Fix: Desync if a weapon about to fire is repaired
Fix: crash on host when a client times out during instant replay
Fix: crash when map doesn’t have weapons added from a mod (replaced with machine guns)
Fix: crash with replays containing mod names >= 20 chars long
Fix: if a player disconnects while using refire, the weapon can’t be used by others
Fix: Spook does not gain resources on theft in TDM
Fix: Armourdillo doesn’t instant repair entire base when activated in TDM
Fix: Anti-air not working with zero gravity
Fix: door doesn’t close when refiring as door shuts
Fix: Reactor explodes consistently when falling out of world
Fix: Prevent laser destroying light arms fire
Fix: when a weapon refires but is unable to afford to fire it can leave a door open and remain associated with the door
Fix: when a weapon tries to fire and must open a door, if the door is already associated with the weapon the command to open it is never sent
Fix: Increase the size and quality of map preview images, now set in constants.lua
Fix: weapons open doors when blocked by structure/device
Fix: Apply skirmish mod before map mods
Fix: Shield strut is visible and fully opaque while disabled and warming up
Fix: ‘Key’ string in Options -> Input tab not translated
Fix: prevent observer showing HUD using F2
Fix: prevent construction of disabled materials (solar panel exploit)
Fix: factions mod a single sprite called gunner in order to customise falling troops
Fix: random sprites shown when hiding early ground blocks with edges
Fix: Cursor snaps to disabled ground blocks
Fix: activate commander message sent by HUD if not fully charged
Fix: ActivateCommander can work if not fully charged
Fix: classic Cannon and Laser only specify Factory as their requirement
Fix: Resave map previews in higher quality and fix cameras of all included maps
Fix: devices and links highlighted when taking preview screenshots
Fix: potential string copy overflow issue with map names
Fix: missile clearance slightly too far