G’day Forts Fans! Welcome to this week’s update, complete with new map Dueling Vipers 4v4. This update adds a few minor features and fixes which improve team death match, and also includes an important fix which ensures doors are closed after repair. We’re aware of the lobby connection and desync issues, including when joining a battle in progress. These are being investigated. 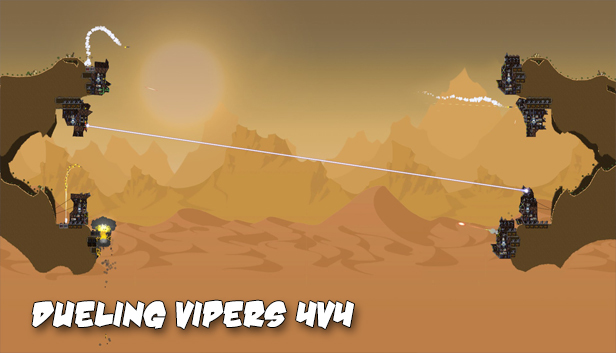 High up in the middle eastern mountains, two ancient snakes are caught in time about to strike at each other. Or at least that’s what it looks like. Attached to their faces are four forts apiece, with three differing styles of play: standing, hanging and cliff face. Whichever you choose, the battle is sure to be intense!

Add: Dueling Vipers 4v4 map
Add: Notification in console of who was taken out in TDM, with time stamp
Add: Show “you have been kicked” in the console instead of just disconnection
Balance: Lower wind floor in Hellmouth 3v3
Fix: AP sniper can penetrate damaged armour & doors
Fix: Collisions not detected in same frame as incendiary mortar hitting back-bracing under repair
Fix: AI don’t build in co-op on Team 2 on Up & Down maps
Fix: Overdrive active icon not showing up when upgrading collectors during active
Fix: Repairing doors don’t close if told to when complete
Fix: Alt-tab and multi-monitor issues
Fix: Resources not zeroed when knocked out of TDM
Fix: knocked out TDM team mates can activate commander
Fix: if a TDM team mate activates commander you don’t hear the activation effect
Fix: invalid missile target shows up at origin by default

Thanks for playing Forts, and don’t forget to head on over to the Official Forts Discord server, if you want to take part in tournaments or meet and battle other members of the Forts community.