G’day Forts fans! We hope you’ve been enjoying using the Map Editor along with the Steam Workshop integration. Judging by the number of new maps in the workshop, it seems to be a success.

This week we’ve added some new features to the editor and workshop to help smooth creative flow and sharing, including selecting, copying and mirroring multiple ground blocks, renaming maps and making maps more identifiable in the map select list. The full changelist can be seen below.

In the coming updates we’ll be shining a spotlight on the best maps created by the community, in an effort to raise the bar of quality on what is already a decent standard. Selected maps will be highlighted in our update announcements, and the author will receive a Forts t-shirt.

Ways to increase the chances of your map being selected include providing AI fort scripts, map description and camera positions. We’ll be doing another update in a couple of weeks, and will select the winning map then, at our discretion. 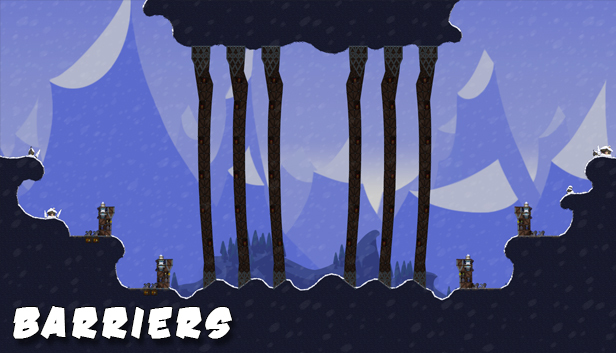 Between two opposing forts lie a series of barriers. Blast your way through these obstacles to get at the enemy, toppling the explosive barrel laden structures as you go, while ensuring not to topple them on yourself. Barriers is available to download from the workshop:
http://steamcommunity.com/sharedfiles/filedetails/?id=1139739159&searchtext=

Add: save terrain clipboard to file to allow copying between maps
Add: multi-select, copy, move & mirror ground blocks
– Hold Ctrl and right click to add (or remove single)
– Hold Alt to remove
– Hold Shift and left-drag a marquee to add multiple
– Hold Alt and left-drag a marquee to remove multiple
Add: a subscribe button to the left of the map button in the lobby
Add: “name” edit field to upload dialog
Add: Workshop item author added to map select screen (friends’ maps only)
Add: localised map names support (mission script DisplayName can be a table with language keys, see Vanilla for example)
Add: Prevent selection of joints and struts while holding Ctrl/Shift
Balance: no energy is consumed by repair
Balance: mortar aiming arcs are as if on a flat platform to plug flat trajectory exploit
Balance: laser can be fired without sufficient energy for entire duration
Balance: machine gun costs no metal to fire to aide rebounds
Fix: sniper shot takes out multiple swarm missiles
Fix: fire temperature not clamped in some circumstance, creating huge flames
Fix: machine gun bullets don’t expire on freefall
Fix: obsolete audio files in effects/media folder
Fix: crash when restoring weapon groups in editor after undo/redo (clear groups)
Fix: ground block extents not updated after mirroring
Fix: Steam overlay pauses game in multiplayer
Fix: ” has joined the game on team” notification doesn’t show the team number
Fix: sweep_blocks not deleting two node blocks
Fix: allow console close during paged output
Fix: warhead doesn’t make large explosion when it hits a shield
Fix: laser fire cost incorrect (3333, should be 5000)
Fix: when laser fires at full strength cost shows as 4933, not 5000
Fix: beam not drawn when shot out of map and parent structure not visible
Fix: inverted missiles are not translated on spook’s most recent enemy build readout
Fix: crash when exiting a multiplayer game when host has disconnected
Fix: crash in TDM when map does not have a fort for a side
Fix: workshop upload faulty if it includes non-ansi characters
Fix: hide -template- and All Or Nothing maps from editable list
Fix: don’t show subscribe text in chat notification for non-workshop maps
Fix: added higher res subscribe icons
Fix: increase map name length to 19 characters and truncate when setting map name in editor for map uploads
Fix: replace workshop prefix with an icon
Fix: sort all maps in player tab as one list: this will alphabetically sort all file select lists
Fix: prevent maps being copied if the target directory already exists
Fix: prevent maps being uploaded if the name is “NewMap”
Fix: prevent maps being uploaded if the name is a dupe of a map the player is already subscribed to

One of the new Map Editor features added in this update is the ability to select multiple ground blocks. This is achieved by holding down Shift and left-click dragging a marquee out around the blocks you want to select. Ctrl and right mouse will add a single block to the selection. You can then drag them all around, copy & paste them, or flip then horizontally (H) or vertically (V). If you want to amend your selection, hold down Alt and drag the marquee around the block you want to remove from the selection. Alternatively, hold down Ctrl and press right mouse button on the block you wish to remove.

Note that if you only have one block selected then these controls operate on nodes within the block, as before. Right-click in space to deselect it if you want to select additional blocks.